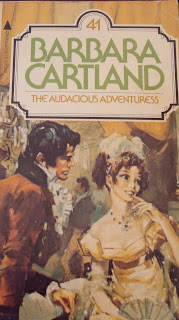 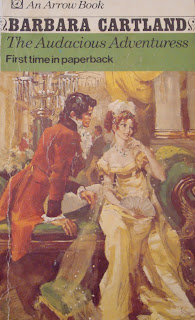 The Audacious Adventuress is the next Cartland book that is illustrated by Francis Marshall. The Arrow (UK) edition was published in 1973 while the Pyramid (US) one in 1977.

Druscilla ends up marrying the Marquis of Lynche after he escapes to her accidentally after leaving the bedchamber of the Duchess, her employer, and almost gets caught. The Duke, wise to him, insists on an immediate marriage, so Druscilla becomes the wife of a man who is loved by women. Can she secure his love all for herself?

Francis Marshall illustrates our couple in a full length pose for the UK book and a cropped image of the pose for the US book. We see the detail of his work on the Arrow book with our couple sitting on a settee. Our heroine is lovely in a yellow regency gown with emerald jewels and a feathered hairpiece. Note her flimsy shawl and pretty fan. The US cover is the same image just enlarged, so that you see our couple up close. I like the full length pose much better; what do you think?

Barbara Cartland wrote about 100-150 books before 1970, when her output became fantastic! In the US, around 1976, she was publishing 2 new books a month and some of the older pyramid editions were reprinted; some with new covers. I think the Bantam editions worked better because they were a new, numbered series. The Francis Marshall covers also encouraged readers to pick up and purchase. At her death in 2000, Cartland had written 723 books and her website: barbaracartland.com is printing out the 160 manuscripts that had never before been published!
Posted by Rhonda at 10:47 AM