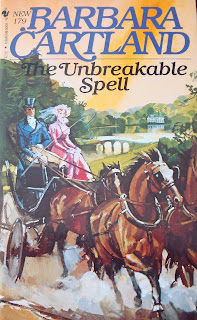 The Unbreakable Spell is #179 in the Bantam series and was published in November 1983. Rocana's cousin, Caroline, is being forced to marry the Marquis of Quorn. He plans to visit her house for a steeplechase and propose, but she is in love with another. Rocana does the impossible: switching places with the bride!!

This is an interesting cover of our couple traveling in a curricle drawn by 4 horses. It looks as if they are leaving the estate in the background. It is an action picture where we can almost see the curricle moving and the horses pounding the ground.
Posted by Rhonda at 5:55 PM No comments:

Lights, Laughter, and a Lady 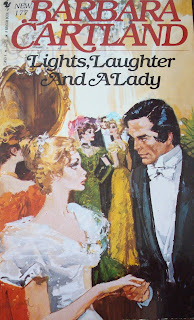 Lights, Laughter, and a Lady is #177 in the Bantam series and was published in September 1983. Minella's father has died and after the house is sold and debts paid, she has only 100 pounds. Instead of going to her aunt in Bath, she travels to London to see Connie, a friend who has become one of the Gaiety Girls, to see if she can help her get a job. When one of their group becomes sick, Minella stands in at a house party given by the Earl of Wynterborne, who conceives a brilliant plan of his own!

This is one of the "up close" cover illustrations that became popular on some of Cartland's books during this time. We see our couple large and centered, with others in the background. This takes place at the first meeting of Minella and the Earl. I see an illustrators signature which looks like Sanbourne.
Posted by Rhonda at 10:35 AM No comments:

Riding to the Moon 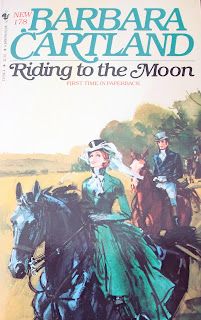 Riding to the Moon is #178 in the Bantam series and was published in October 1983. It had a hardcover publication in 1982. The Marquis of Ardsley, an expert of horses, is convinced that he can tell if a lady is quality or not. Jimmy and Charles, who hear his boast, bet each other that they can find a woman who will trick the Marquis for three days and when they rescue Indira, they are convinced of it!

We see Indira and the Marquis riding while she is visiting his estate. He is interested in steeplechase racing and it gained in popularity during the regency era. I like her emerald green riding habit which looks great set off against her black horse!
Posted by Rhonda at 11:14 AM No comments: 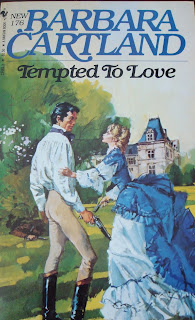 Tempted to Love is #176 in the Bantam series and was published in August 1983. Ivona is in France and in hiding from her mad father when her mother dies. She runs into the Duc of Sancerre, who is determined to protect her!

This is such a pretty cover with our heroine wearing a bustle dress, popular in the 1870's. I love the darker blue bustle over the lighter blue underdress. Our heroine looks as if she's attempting to stop a duel. I hope you like this cover as much as I do. Click to enlarge.
Posted by Rhonda at 8:12 PM No comments:

A Duke in Danger 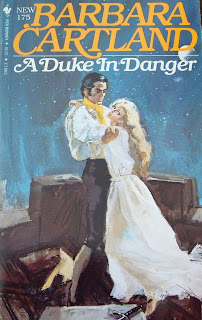 A Duke in Danger is #175 in the Bantam series and was published in July 1983. The Duke of Harlington has just inherited and leaves the army of occupation to go back home to England. He finds out that some valuable pieces from the estate have been pawned and goes to Harlington Castle to confront his cousin Alvina. Between putting the Castle back together and trying to find a wife to thwart his heir, Jason, the Duke and Alvina find a true love.

This is an interesting cover where our couple stand at the top of a tower on the castle roof. I consider this one of the early "nightgown" covers where our heroine is scantily clad and still manages to save the hero!
Posted by Rhonda at 10:18 AM 1 comment:

Help from the Heart 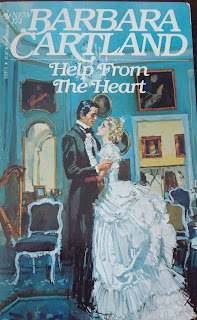 Help from the Heart is # 174 in the Bantam series and was published in June 1983. Forella is used as a pawn by her aunt in order to trap an Earl into marriage. She is saved by Prince Janos Kovac and sent to stay with a distant relative of his, who is also Hungarian, as is Forella. It's a romantic story of how they find love!

I think this is a beautiful cover with our heroine all in white and the hero handsome in black. The heroine's dress looks like a wedding gown, though I'm not too sure about the feathers on top of her hairdo, unless she's dressed for court! I've always loved Cartland's stories of Kings and Princes and this one won't disappoint!
Posted by Rhonda at 5:16 PM No comments: 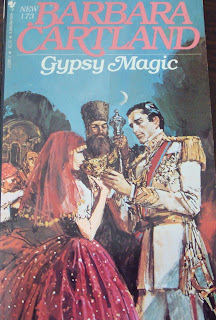 Gypsy Magic is #173 in the Bantam series and was published in May 1983. Princess Laetitia is stunned when she finds out that King Viktor is coming to propose to her cousin Stephanie because Stephanie is in love with Laetitia's brother Kyril! Hoping for a way to stop this engagement, she meets with the gypsies and they offer to help her!

I love this cover where our couple exchange wedding vows in a gypsy ceremony! Our hero is handsome in his uniform while our heroine is a vision in a native wedding costume! It looks very sacred and holy as the ceremony takes place outside under the moon!
Posted by Rhonda at 11:55 AM No comments: 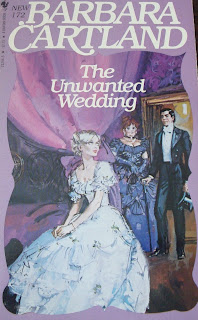 The Unwanted Wedding is #172 in the Bantam series and was published in April 1983. The Duke of Tynemouth has just heard from his mistress that Queen Victoria is planning on marrying him to one of Prince Albert's relatives! In order to prevent this, his mistress offers her niece as a bride, thinking that he'll continue their relationship! Honora, however, is different than he expects and after a rocky start, they find out that they have much in common.

This scene is after the new Duchess runs off after her wedding. I've always like this cover and the very pretty heroine in her wedding gown. This is a great story and easy read; another Cartland triumph!
Posted by Rhonda at 3:24 PM No comments: 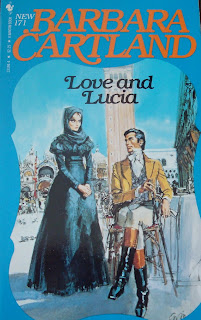 Love and Lucia is # 171 in the Bantam series and was published in March 1983. The Marquis of Wynchcombe is traveling in Venice and is approached by Lucia Beaumont, an Englishwoman, who is living there with her painter father, who is ill. She pleads with the Marquis to purchase some of her father's paintings and for his help after he dies.

I like this cover with our heroine, dressed in black, hovering near the Marquis in order to talk to him. He is elegant as he sits at the cafe and we see that he is interested after he realizes she is no ordinary beggar. The square has pigeons and people and looks like a nice place for a coffee!
Posted by Rhonda at 6:16 PM No comments:

Journey to a Star 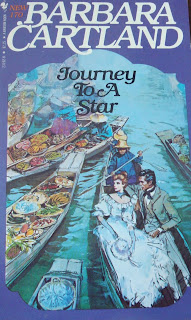 Journey to a Star is #170 in the Bantam series and was published in February 1983. Tarina's father has died and she arrives in London only to find her cousin, Betty, packing for a voyage to Siam with the Marquis of Oakenshaw! When Betty's maid breaks her leg, Tarina goes along as her maid and both of them find love under the oriental sky!

This cover depicts the famous Floating Market in Siam, now Bangkok, Thailand. Our couple sit in a long rowboat being guided by a native, where fresh fruits and vegetables are for sale. Barbara Cartland visited in 1982 and describes the floating market that she could see from her hotel balcony!
Posted by Rhonda at 2:31 PM 1 comment:

A King in Love 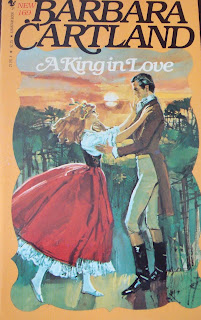 A King in Love is #169 in the Bantam series and was published February 1983. It had a previous hardback publication in the Doubleday Book Club in 1982.

King Maximilian of Valdastien is being pressured to marry due to the political unrest in Europe, so he decides to visit the surrounding countries in order to find a Queen! On his visit to Aldross, Princess Zita is ordered to stay above stairs so that she won't interfere with the King's meeting with her sister, Princess Sophie. For a lark, she pretends to be a waitress at the inn where the king is staying and that's how they meet and fall in love!

I've always thought this a pretty cover with our heroine wearing the full skirted native costume of Aldross. It's a tender moment of our couple's reuniting. Very colorful and scenic.
Posted by Rhonda at 8:32 PM No comments: 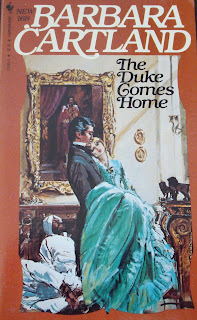 The Duke Comes Home is #168 in the Bantam series and was published in January 1983. Ilina's father has died and the estate has been inherited by her cousin Sheridan. Unfortunately, there is no money and she is left the "Nizam's jewels," which are hidden somewhere in the house! Once the new duke arrives, she has to convince him to stay and take his place instead of returning to India and his life there.

This cover scene is after the heroine and hero are attacked by foreigners trying to find the Nizam's jewels. Our heroine wears a pretty green gown and the strong hero carries her to safety. We see a large portrait which is a clue to the mystery!!
Posted by Rhonda at 9:03 PM No comments:

Love on the Wind 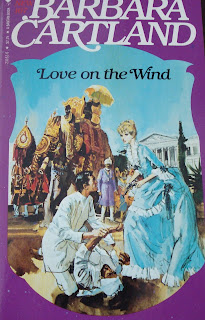 Love on the Wind is #167 in the Bantam series and was published in December 1982. Sita, working for her abusive uncle, is saved by a mysterious man while they are on a ship traveling to India! He works miracles while they are on board and she wonders if she'll see him after landing in India?

This cover is very flamboyant with elephants and a palace in the background. Our hero struggles with another man while the heroine looks on. We see an important Indian in purple standing in the background. Barbara Cartland visiting India in 1982 and in the past it was part of the British Empire!
Posted by Rhonda at 6:37 PM No comments:

From Hate to Love 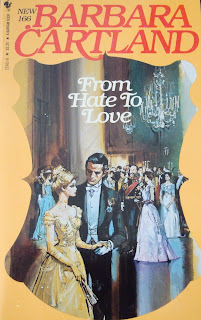 From Hate to Love is #166 in the Barbara Cartland Bantam series. This book was published in December 1982. Atayla is wounded after an attack that kills her father in Tangiers. She recovers and is wondering how to return to England when she is hired to take young Lady Felicity Roth back to her father.

This cover is pretty with our heroine all in gold as she enters the ballroom. We get the idea of a large room with very elegantly dressed people inside. Done by an unknown illustrator, but close to Cartland's standards.
Posted by Rhonda at 3:23 PM No comments:

A Marriage Made in Heaven 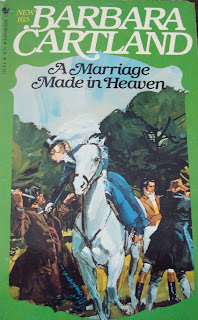 A Marriage Made in Heaven is #165 in the Bantam series and was published in November 1982. The Duke of Buckhurst is forced into finding a bride after his dissolute cousin and heir marries and impregnates an actress! He leaves the finding to his sister who despairs until she meets Lady Samala Wynn, who accepts her offer!

This is an interesting action scene for this cover with our new bride, stabbing a ruffian who is attacking her and the Duke. We don't know why they are being attacked, but we can guarantee who will win this battle!
Posted by Rhonda at 3:08 PM No comments: