A Princess Runs Away 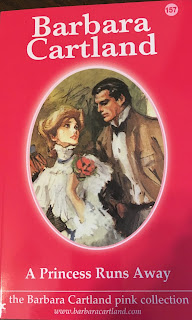 A Princess Runs Away is #157 in the Pink Collection by Barbara Cartland and was published in October 2017.

Orphaned Princess Vasila is living in England and is told by Queen Victoria that she is to marry the Prince of Saralovia, who is requesting a Royal British wife. She runs away to the circus and meets a man who is also hiding from those who wish to kill him. How he comes up with a creative solution so that he and Vasila can marry is the plot of this romance!

This cover is identical to Bantam #115 Women Have Hearts. http://barbaracartlandbooksandcoverart.blogspot.com/2009/11/women-have-hearts.html
Posted by Rhonda at 9:48 PM No comments: