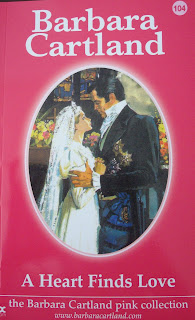 A Heart Finds Love is #104 in the Pink Collection and was published in May 2013.  Alnina Lester is picking up the pieces after her brother's tragic death in a duel and selling off items from her house in order to pay his debts. She reluctantly advertises her mother's unique wedding gown which attracts the notice of the new Duke of Burlingford, who meets Alnina and asks her to pose as his wife and go with him to Russia, since she speaks Russian.

It's an interesting story but I was a bit confused that the title had died out; usually there is a male relative somewhere that can inherit.

This cover is identical to Camfield #46 http://barbaracartlandbooksandcoverart.blogspot.com/2011/04/forced-to-marry.html
Posted by Rhonda at 2:42 PM No comments: 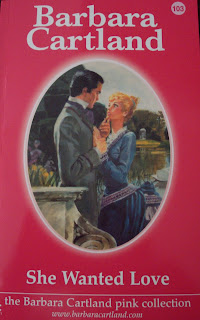 She Wanted Love is #103 in the Pink Collection and was published in April 2013.  Lady Eleta Renton leaves her French boarding school to return home and finds out that her stepfather is forcing her to marry the Duke of Hazelware, who is over 50. She runs away with the help of her maid to become governess of the Marquis of Teringford's tiresome child and teaches the child and her father about love eternal.

This cover is identical to Camfield #28 Look with Love: http://barbaracartlandbooksandcoverart.blogspot.com/2011/02/look-with-love.html

Many of these are being published in both book and ebook form. Check amazon.com or barbaracartland.com for more information.
Posted by Rhonda at 8:06 PM No comments: